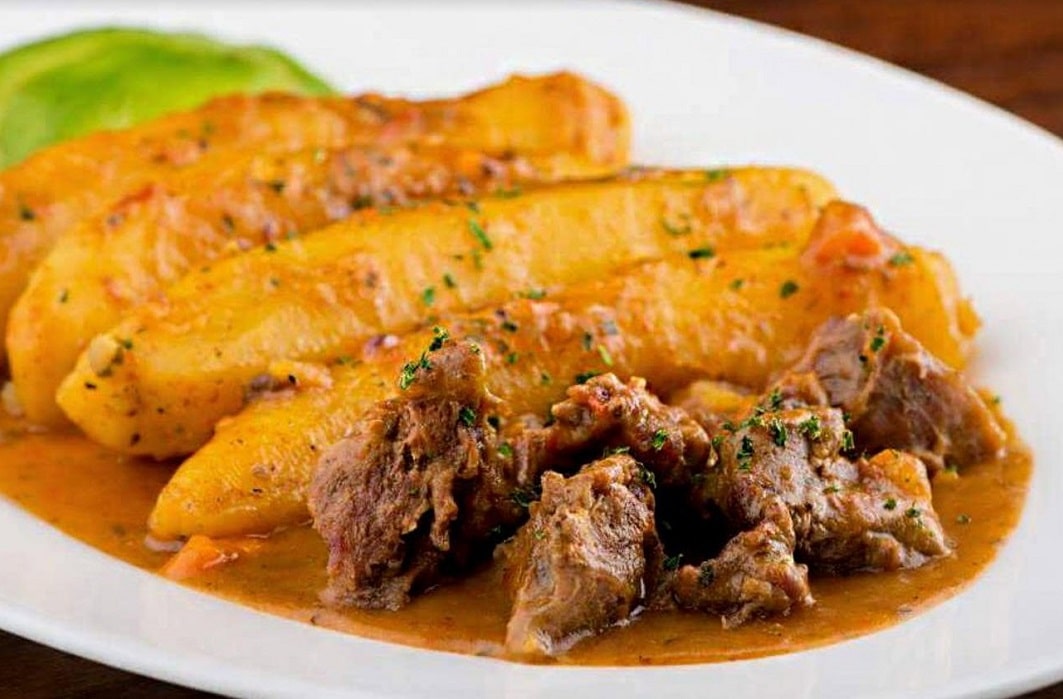 Westernization has influenced most of Africa’s local cuisines.

Uganda, a landlocked country in the Eastern part of Africa, is no exemption. Widely known for its dense misty forests, snow-peaked mountains, glassy lakes and sprawling savannas, Uganda attracts thousands of foreigners every year. A major part of every foreigner’s experience of another country is the food.

Ugandan cuisine consists of both traditional and modern cooking styles. Most foods and dishes are mixed with English, Arabian, and Asian influences. In Uganda, meals are served in courses.

These are five popular Ugandan dishes any visitor in the country can try:

Luwombo is a traditional Ugandan dish that is believed to have been created by the personal chef of Kabaka Mwanga, who ruled Buganda (now Uganda) at the tail end of the 19th century.  The food is a stew dish that is made from beef, mushrooms, chicken or fish steamed in banana leaves. The beef or chicken, together with vegetables like potatoes and carrots, are wrapped in banana leaves, then steamed with the right amount of salt, oil and spices. Luwombo is said to be a royal dish cooked especially during holidays. Smoked fish can also be added to the beef or chicken.

The word Muchomo is adapted from the Swahili word “choma” which simply means roasted. Muchomo can be anything from goat meat, chicken gizzards, pork chunks and any kind of meat in-between. Muchomo is sold in restaurants, roadside shops, and sports hangouts and pitches. The meat is usually served with sweet roasted plantains, commonly called gonja.

Posho is one of Uganda’s all-time favourites. It is sometimes called ugali, and it has been compared to Italy’s polenta because it is neither sweet nor savoury. It only takes on the flavour of the soup that it is served with. Posho is a fine white corn flour that is thoroughly mixed with boiling water until it stiffens into a smooth, doughy consistency. It can be eaten with other dishes like soups and beans. The dish is known for enriching the overall meal and leaving one satisfied after eating. For one to enjoy posho, it is important for the posho to be thoroughly mixed until very smooth.

This is Uganda’s traditional breakfast dish, although it can be enjoyed at any time of the day.  Katogo is a heavy meal that contains fried plantains served with soup, beans, beef and vegetables. Though health practitioners frown at eating heavy food for breakfast, Katogo is a remedy just in case you’ve been exploring the nightlife.

In the morning, when you walk into any street in Uganda lined with cafes, it is the irresistible aroma of Katogo that will greet you. It is believed that once you start your breakfast with Katogo, you will not eat much for the rest of the day. People prepare Katogo with Irish potatoes, greens, cassava, sweet potatoes, or viscera from goats, chicken or cows, which are cooked together in the same pot.

By now, you must have learnt that plantains are a major part of Ugandan cuisine. Probably the most famous dish in Uganda and often referred to as “Uganda’s national dish”, Matoke is a porridge-like meal of plantains or green bananas. Prepared with any meat type, from chicken to beef, goat or lamb meat, matoke is every foreigner’s delight. There is also a vegetarian option prepared without any meat for vegan visitors.

In Uganda, you will hear this dish being called G-nut sauce. This is Uganda’s most well-known side dish. Almost every meal in Uganda is served with G-nut sauce. In other Eastern African countries like Western Kenya, G-nut sauce is eaten on its own as a soup. The sauce is a creamy paste made from sweet red peanuts and served with meals as a condiment. It can be served with sweet potatoes, cassava, matoke (boiled mashed plantain) and even with roasted fish.

It can be seen that traditional dishes in Uganda are grouped into two: the main dishes which are usually based on a sauce or stew of groundnuts, beans or meat or fish alongside with the starchy traditional meals that come from maize meal or steamed and mashed green banana.

The second group is the vegetable and fruit which can be boiled in the stews, or served alongside with main dishes. This makes Uganda not only an amazing destination where foreigners could go see its wildlife conservative parks or go hiking on its steep mountains but also a place to enjoy delicious local food.