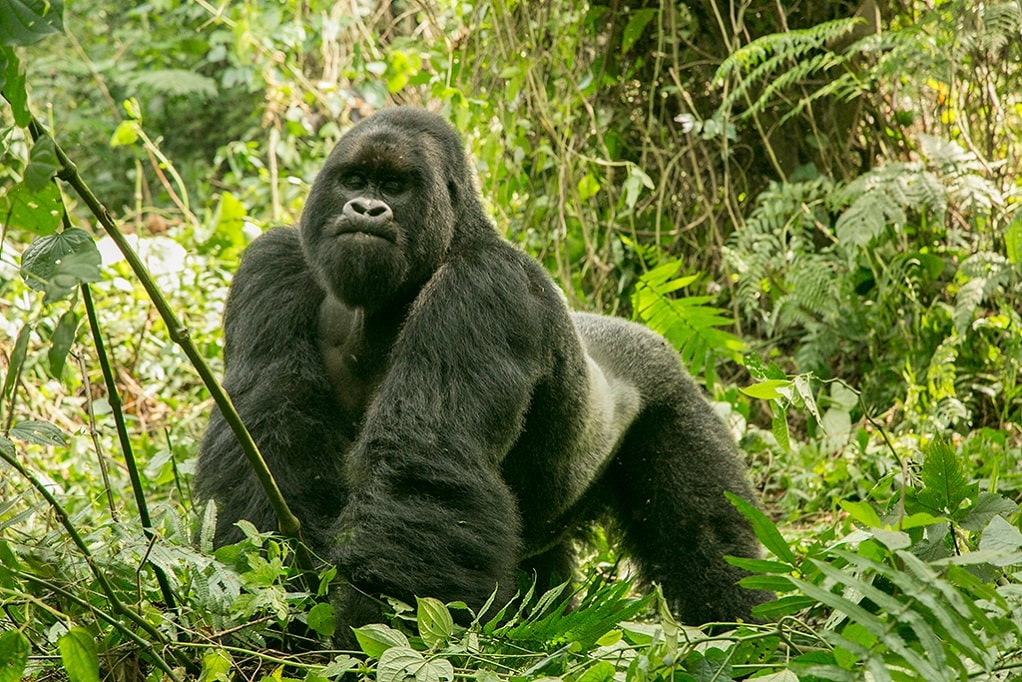 Gorilla trekking is only done in three countries in the whole world and these countries are only found in continent of Africa.

The three African countries where you can go gorilla trekking are:

b. Rwanda (Volcanoes National park) and

c. Congo (Virunga National Park which is the oldest national park in the whole of Africa)

Mountain gorillas belong to the subspecies of the eastern gorilla which are also limited to protected national parks. These national parks are situated around mountainous and forested areas.

Gorillas live in groups of 30 in number and they are headed by an alpha male gorilla who is usually older than others. As their name implies, mountain gorillas live in forests high in the mountains, at elevations of 8,000 to 13,000 feet.

Gorillas have in the past shown a high level of intelligence when they sense danger and usually turn very aggressive in these situations. They have sometimes proven to be conversant with human sign languages and as such can understand certain aspects of human behaviour. Gorillas can be trained to communicate easily with humans.

Gorilla trekking is the act of going up a bushy mountain to see and experience how sub-Saharan African and herbivorous apes live their lives in their natural habitats.

Gorilla trekking is done for about 1 to 2 hours any time of the year and it is a means of discouraging poaching and also at the same time a way of assisting the economy of the countries that own and manage the parks.

A compulsory permit from the park authorities is needed for trekkers and also a trained guide who will accompany visitors to these locations. The guides know the best routes to see the gorillas and also the way to stay out of trouble.

These guides are specially trained to understand the animals and know the meaning of their movements to assure the safety of visitors.

When considering embarking on this adventure, it is advisable to get a permit early as purchases are being requested in numbers which reduce the chance of getting one at the needed time.

This wildlife adventure which leads into the impenetrable mountain forest where endangered species of gorillas find comfort in hiding from poaching, civil wars, habitat destruction and any other forms of human attack can be quite risky but all the same very fun.

It is advisable to abide by all rules and do exactly what the tour guides say. A close encounter with the gorillas can be amazing but can also easily go awry so do whatever you are told to do to stay out of danger.

Here are some of the safety tips and regulations to ensure the safety of trekkers:

1. Kids who are below 16 years of age are not allowed to purchase trekking permits.

2. Make sure to maintain a clean environment like you see it and try not to litter with harmful water products that might endanger the animals.

3. Make sure to keep a distance of at least 7 meters away from the gorillas at all times.

4. Stand still and hold your breath if a gorilla charges towards you as your body movement might make it more aggressive.

5. Do not exceed the trekking time as these creatures might get uncomfortable with your presence any time and attack you.

6. Do not think of trekking if you are physically unfit or if in any way sick as there is no ambulance up the mountains and no emergency clinic.

7. Know when and when not to use your cameras. A gorilla may easily mistake taking a photo as posing danger and attack you.

8. Do not draw the attention of these animals with loud gadgets as they may feel challenged by the sound and attack you in defence.

These rules and guidelines will ensure that one is not harmed in the process of knowing what it looks like to be close to these big apes so it is important that you take them seriously.