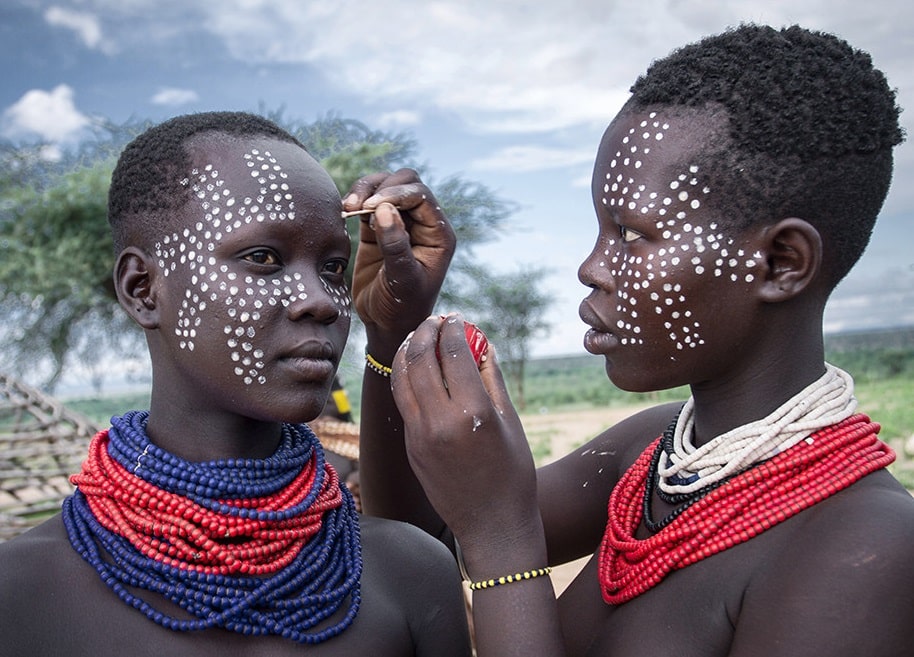 Credit for the cover image goes to Einat Klein (einatklein.com)

Along the Lower Omo Valley, in the southern part of Ethiopia, sits the home of the Karo tribe, an indigenous African tribe that has lived in Ethiopia for centuries.

The Karo tribe is a population of about 1000 to 2000 people, making them the smallest ethnic tribe in Ethiopia.

The reason for their small population is rumoured to be a deadly scourge of sleeping sickness that affected the population at the end of the nineteenth century. According to oral tradition, the Karo tribe settled along the banks of the Omo River after following a red bull there almost two centuries ago.

As small as they are, the Karo tribe is surrounded by more powerful and wealthier tribes like the Hamar, Bana, Bashada, Nyangatom, and Mursi.  Because of these other powerful tribes, the Karo tribe has created a complex social hierarchy to thwart intermarriage and keep their lineages pure.

The Karo tribe may not intermarry with the other tribes, but they have always traded with these tribes for cloth, beads, cattle, and food. Both the Karo tribe and Harmar tribe speak virtually identical Omotic languages.

It is believed that the Karo and Harmar tribes share the same ancestry. This is confirmed by the close similarity in cultural practices between the two tribes.

Almost like the Harmar, the Karo tribe practise flood retreat cultivation, and they grow sorghum, maize, and beans. They also fish and breed cattle and goats.

The men spend much time hunting, while the women, for their part, handle domestic chores.

Here are some very interesting things you should know about the Karo tribe:

1. Art and culture of the Karo tribe of Ethiopia

Their body designs are marked with fine dot lines traced with palms or fingers. They decorate their faces and bodies using white chalk and a kind of red pigment (ochre).

Karo men usually paint themselves brighter than the women, in order to look more attractive and courageous. The women sometimes inflict lacerations and cuts on their chests, stomachs, or backs to produce intricate patterns of scars with knife or razor.

When these cuts are made, ashes are rubbed on them, in order to produce a permanent welt. These cuts usually indicate maturity.

Karo men scarify themselves too, usually as a symbol of bravery, perhaps for killing enemies from rival tribes or killing a deadly animal. Such men are held in high esteem in the community.

2. How the Karo tribe dress

Karo women wear only a skin loincloth, which is usually decorated with beads and cowries. They also drape colourful beads around their necks. Their hair is greased with red clay or lathered with ochre mixed with animal fat.

The men’s hairstyle is elaborate: one part is made from one ear to the other. The front hair may be braided with the braids made to hang around the forehead. The rest of the hair is then pulled back into a thick bun and held still with something like mud.

Brave Karo warriors are bestowed the right to wear a grey and red-ochre clay hair, and bun with an Ostrich feather which indicates that he has bravely killed an enemy from another tribe or a dangerous animal before.

Although this clay hair-bun takes up to three days to construct, it is remade every three to six months and can be worn for a long period, up to one year. Large beads worn around the neck of men also signify a big game kill.

3. Common rituals and ceremonies of the Karo tribe of Ethiopia

During important festivities and rituals, Karo men cover their bodies and faces with ashes mixed with fat. These ceremonials enable the men to exhibit their beauty and courage and also to exercise their ability to attract a woman.

One of such a festival is the Bula initiation, which is known as bull jumping, an initiation ritual which signifies the coming of age for young men. During the festival, for an initiate to prove his readiness for manhood, he has to jump over rows of cattle six times in a row.

Those who fail are disgraced while the successful boys qualify to marry and earn the right to appear in sacred places with elders of the clan. But in the Karo tribe, the young man can only marry if his older brothers have done so.

The Karo’s artistic practices on their bodies are for self-pleasure and pride, respect and symbolic recognition within their society, and also as a means of attracting the opposite sex during rituals.

Courtship dances are frequently held and oftentimes the outcome of these frenzied, impassioned dances end in future marriages.

What one really notices is that the Karo tribe love to adorn themselves with bright accessories. It is one of their most striking tribal cultures.

However, the modern world has begun to creep into their existence. This tribe now has plastic water containers, old T-shirts and automatic weapons.

Tourists also now pay US$20 as an entry fee to the village, and a picture with a Karo warrior could cost anything from one to five dollars.

This new income into their village has discouraged young men from tending animals or growing crops as people did in the old tradition. The Karo tribe never practised stick-fighting, but for the sake of entertaining tourists, they have adopted this practice from their neighbouring tribe, Mursi, and it could cost a tourist up to US$60 to watch a fight.

Even the scars Karo men make on their bodies is now for dollars, instead of the normal beauty.  In 1990, towards the end of the Mengistu reign, the on-going conflict in Sudan and Somalia ensured a flood of AK-47 into the region.

The tribe now use guns to protect cattle, to hunt and to settle disputes. In 1980, UNESCO named the Omo Valley as a World Heritage Site for its unique and diverse culture.