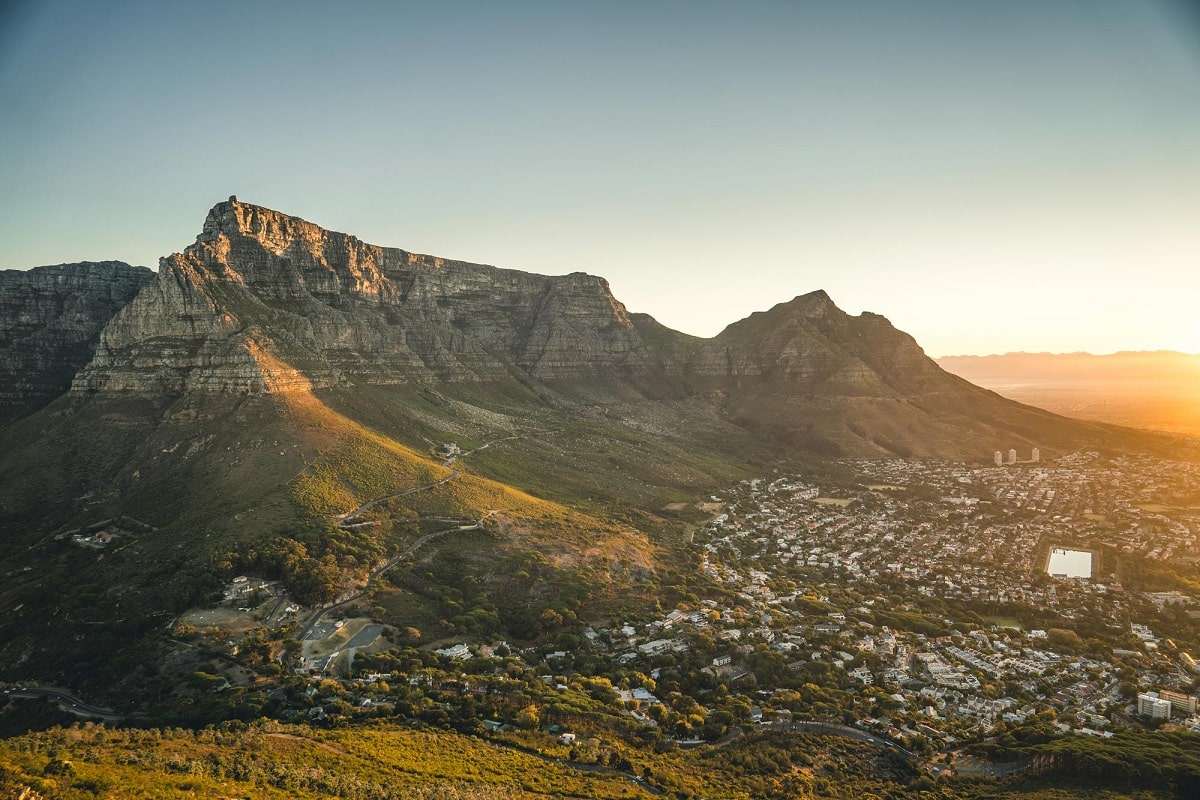 The early inhabitants of this area (known as the Khoekhoen people) called the Table Mountain huri’oaxa, meaning ocean-emerging mountain.

Several archaeological sites can be found within the park including signs of the San and Khoi people in the form of shell middens along the shore, stone tools and potsherds found in caves up on the mountain.

The Khoi name for Table Mountain is Hoerikwaggo which means Sea Mountain or mountain in the sea.

In 1503, the first European to visit the area, António de Saldanha, arrived at Table Bay and climbed the mountain. He named it Taboa do Cabo meaning Table of the Cape, in his native Portuguese. The great cross that the Portuguese navigator carved into the rock of Lion’s Head is still traceable.

During the British occupation in 1796, Major-General Sir James Craig ordered three blockhouses to be built on the Table Mountain: the King’s blockhouse, Duke of York blockhouse (later renamed Queen’s blockhouse) and the Prince of Wales blockhouse.

The only standing blockhouse today is the King’s blockhouse which is still in good condition and is easily accessible from the Rhodes Memorial. The ruins of the rest are still on the mountain.

The park was named Cape Peninsula National Park in 1998 by the then President of South Africa, Nelson Mandela. The national park is located in Cape Town, South Africa.

As of 1930, years before the park was officially proclaimed, arguments about founding a park on the Cape Peninsula had started. In 1952, the Table Mountain Preservation Board was set up and the Mountain was approved and declared a national monument five years later.

In 1960, nature reserves were declared on Table Mountain, Lion’s Head, Signal Hill, and Silvermine by the Cape Town City Council.

Due to the high level of fire incidents that occurred around the Mountain area from 1970 and the following years, Douglas Hey was appointed to assess the ecological state of Table Mountain and the southern Peninsula, after which he recommended in 1978, that all Peninsula mountains above 152m should be conserved. This brought about the establishment of the Cape Peninsula Protected Natural Environment (CPPNE) area in 1989.

The park runs north-south, along the range of mountains that make up the mountainous spine of the Cape Peninsula, from Signal Hill in the north, through Lion’s Head, Table Mountain, Constantiaberg, Silvermine, and the mountains of the southern Peninsula, ending at Cape Point.

This section consists of Signal Hill, Lion’s Head, Table Mountain (including the back table), Devil’s peak, Twelve Apostles and Orange Kloof. It is bordered by central Cape Town in the north, Camps Bay and the Atlantic Coast in the west, the Southern Suburbs in the east, and Hout Bay in the south.

This section was formed from the Table Mountain National Monument, Cecilia Park and Newlands Forest. Kirstenbosch National Botanical Garden is not officially part of the national park, but its higher reaches are maintained as part of the park.

This section of the park runs northwest to southeast across the Peninsula from the Atlantic seaboard to the False Bay coast. It covers Constantiaberg, Steenberg Peak and the Kalk Bay mountains. It is bordered by Hout Bay in the north-west, the suburbs of Constantia and Tokai in the north-east, Kalk Bay in the south-east, and Fish Hoek and Noordhoek in the south-west.

This section was formed from the Tokai State Forest and the Silvermine Nature Reserve.

OTHER ATTRACTIONS ON THE TABLE MOUNTAIN NATIONAL PARK

Table Mountain has a large variety of side attractions asides its numerous hills and mountains.

There are over two thousand plant species that can be found in the valleys and botanical gardens in the park, some endangered and some the last of their kind.

Animal species of all kinds can be found in the park, both wild and crossbred animals. Tourists are however advised to refrain from feeding the animals especially the wild ones.

This beach can be found on the park and it is South of Simon’s Town and it contains a massive colony of African penguins.

5. CAPE POINT AND THE  CAPE OF  GOOD HOPE

They are both places with amazing scenery. Although, contrary to popular belief, they are not the most southern tip of Africa nor the meeting place of the Atlantic and Indian Oceans.