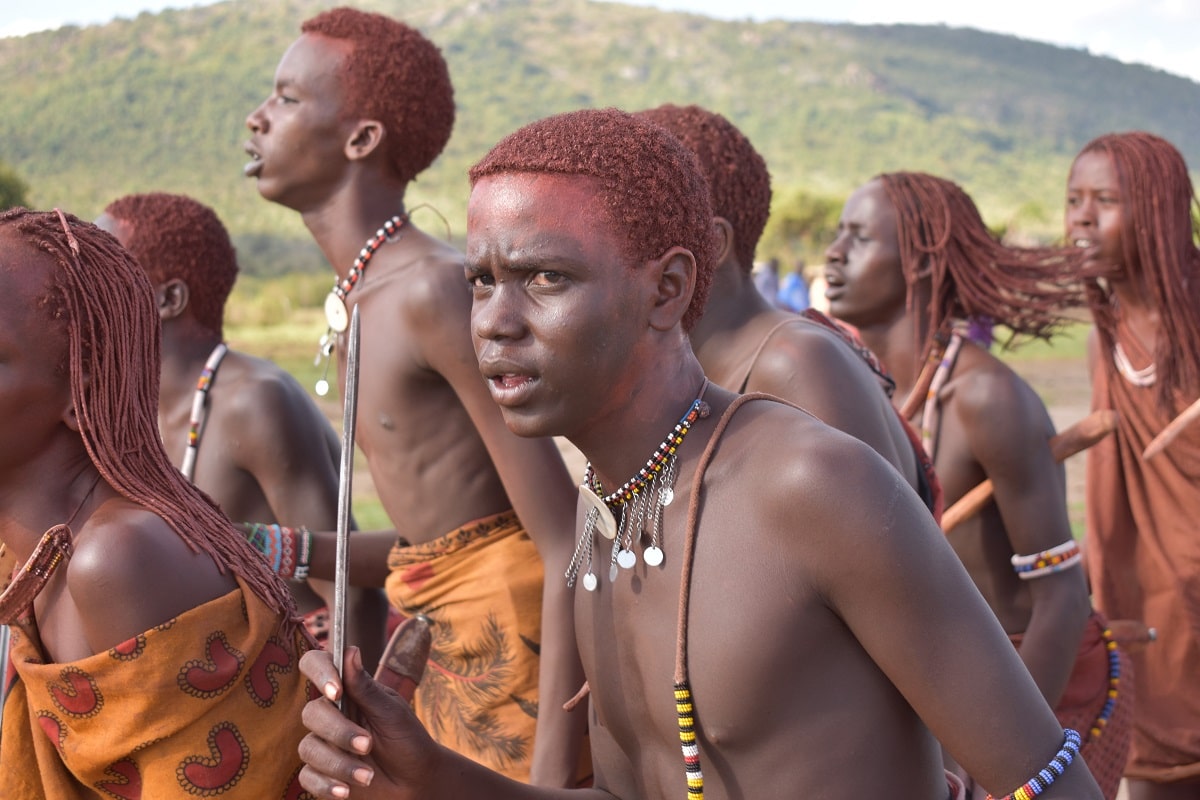 Namibia might be a small country, but it is inhabited by over 10 distinct tribes, each of them as interesting and remarkable as it gets.

The largest tribe in Namibia is easily the Ovambo tribe, which constitutes around half of the total population of the country.

Very distinct from the Ovambo is the Himba people (OvaHimba) who inhabit much of Northern Namibia, mostly the Kaokoland area.

The story is that the Himba are descendants of a group of Herero herders who fled into the remote north-west of Namibia after being displaced by the Nama.

The Himba and Red Cosmetic

Himba women collect a reddish earth pigment called ochre which they mix with butterfat and other herbal resins to make the otjize.

Himba women cover their skin and hair with this otjize ointment in order to stay clean over long periods due to water scarcity. The otjize also protects them from the extreme heat of the Kaokoland as well as mosquito bites.

It is this otjize that gives Himba women the distinctive reddish appearance. The otjize is valued throughout Himba. Wearing the aromatic ointment is considered a beauty ideal – the red symbolizes the earth and blood, two important elements of life.

The lifestyle of the Himba Tribe

The main occupation of the Himba tribe is livestock farming. In fact, a man’s wealth is calculated by the number of cows he owns. You will likely never hear a Himba man revealing the true number of his cows. Doing so might bring him thieves.

Himba women do most of the domestic work which includes fetching water and firewood, cooking and serving meals as well plastering their homes with red clay. A lot of them are also into handcrafts, making clothes and jewellery.

The men’s major work is tending to their livestock which includes taking them grazing for long distances. It is not uncommon for Himba men to be away from their homes and wives for long periods. The men are also involved in construction and village politics (council meetings and chieftaincies).

Food of the Himba people

Milk and grains (maize and millet) are a major part of Himba’s diet. The livestock provide milk and meat. The main food of the Himba is called oruhere ruomaere which is a mixture of sour milk and maize porridge. In times of milk scarcity (when the cows produce less milk), only plain porridge is eaten. Families who cannot afford milk also eat plain porridge.

The Himba are polygamous in nature. The average Himba man is married to more than one wife at a time. The more cattle the man has, the more wives he would take.

The tribe is mostly semi-Nomadic so it is not uncommon for families to move from one homestead to another in search of grazing for the animals.

Marriages are usually arranged. Young Himba girls are married to male partners chosen by their fathers. This may sometimes mean that girls aged 10 or below are married off. All of Himba do not agree to this practice, but it continues nonetheless.

Himba people also have their two bottom teeth removed as a coming-of-age ritual. When a Himba girl comes around the age of twelve, an older woman removes the teeth by forcing pressure on the two teeth with a stick.

The Himba’s way of worship

Himba people worship a god called Mukuru. They also pay respect to their ancestors who act as Mukuru’s representatives. Mukuru only blesses, while the ancestors can bless and curse.

An ancestral fire (called okuruwo) is usually built around each home. The fire represents ancestral protection.

Each family has its own ancestral fire, which is kept by the fire-keeper, who attends to the ancestral fire every seven to eight days in order to communicate with Mukuru and the ancestors on behalf of the family.

Credit for the images used on this post goes to photographers Eric Lafforgue and Stephanie Ledoux.