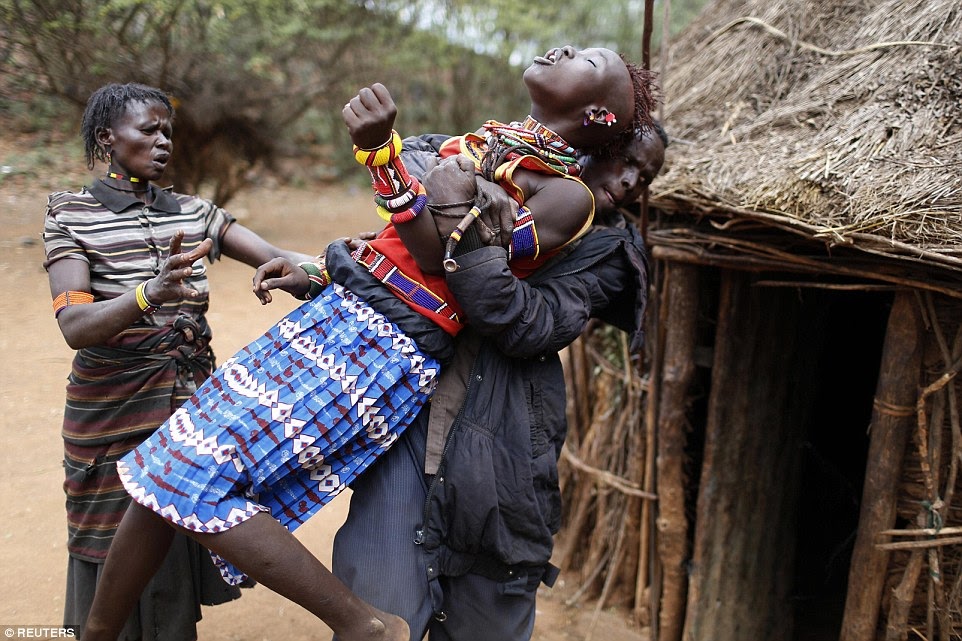 Credit for the two images used in this article goes to Reuters photographer, Siegfried Modola.

I have already written about some “strange marriage customs found in Africa“, but this one is another major.

Both communities are mostly agrarian, but the latter are mostly cattle herders who roam the landscape looking for grazing lands for the animals.

The Pokot tribe value their livestock; their goats, cows and camels all mean a lot to them, and they can go to extraordinary lengths to get it.

In the Pokot tribe, parents sell daughters into marriage in exchange for livestock. Girls as young as 14 are dragged away from their villages for a dowry of 20 goats and three camels, and this insane marriage custom is still in practice in Kenya today.

At the start of a girl’s adolescence, the father would bargain with interested suitors for the right dowry. The dowry is paid in livestock form: goats, cows and camels.

Most of the girls have no idea a deal has been struck on their head as they spend a month in isolation as part of a coming-of-age ritual. The ritual ceremony serves as a rite of passage into womanhood and every young girl must partake in order to fully transition into a grown woman.

During the ceremony, girls are made to punch a cow into submission before it is killed. The Pokot tribe in Kenya is also known to practice female genital mutilation.

The image above shows the heartbreaking moment a young girl of the Pokot tribe is sold into an arranged marriage for a dowry of livestock.

The marriages are usually arranged before the traditional ceremony which marks a girl’s passing into womanhood takes place. The dowry negotiations would have been done and the livestock received. The normal dowry price for a Pokot girl is 20 goats, three camels, and ten cows.

At the end of the rite of passage ceremony, the girls are seen wearing colourful tribal jewellery and with their hair tied up in braids. This is where their father and new husbands would come to drag them away.

Many of the girls, who are members of the Pokot tribe, are not aware they have been bargained away until their husbands come to collect them after spending a month in isolation before the ceremony takes place.

Usually, the girls will struggle and try to escape but they are held down and dragged away. An older aunt might be around to advise the struggling girl to stay quiet, telling her encouraging things that will help calm her down.

In most cases, the girls would stop struggling and let their new husbands take them away. But their tears usually keep running, as in the picture below:

Most times, when a young adolescent girl learns her family is arranging her marriage, she would run away. This is the reason the family now goes about this in secret, without letting the young girl involved know.

Because the dowry is usually high, involving several goats, cows and camels, payment in instalments is allowed. The livestock can be paid to the girl’s family over a series of weeks, or however the parties agreed, but the dowry must have been completed before the marriage is certified complete.

Usually, the remainder of the dowry is brought on the day of the ritual when the men will also collect their brides.

Kenyan law forbids childhood marriage, but as with many tribal customs, traditional and customary laws are considered more important.

The new anti-child-marriage law in Kenya was put up as an attempt to crack down on tribal practices, but many simply ignore this law. Even now, the Pokot tribe, because of their strict non-progressive ways, are beginning to be seen as barbaric and unacceptable in modern-day Kenya.

During the ceremony, the village men will select a bull from among the cattle to be slaughtered and eaten. Before the animal is killed, the women are required to punch it into submission as a sign of their new strength.

After the women have weakened the cow by punching it, it is killed by the men using a single spear stab to the heart.